Idlib and Beyond: What Happens Next 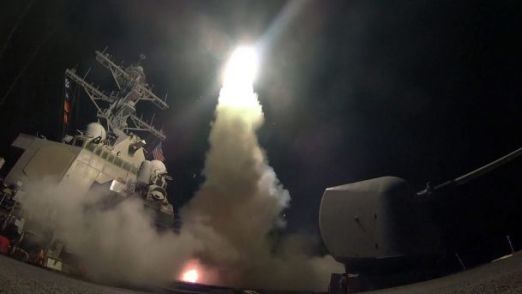 Just a few hours after President Trump said something needed to be done about the chemical attack on civilians in Idlib, Syria, he… did something. In the form of 59 Tomahawk missiles, Trump authorized a strike on one of Assad’s airfields. There were Russian soldiers at the base, though they were given advance warning to vacate the premises. There were also reportedly chemical weapons on hand at the base, which the strike purposefully avoided in order to minimize further civilian casualties.

Reaction was swift and mixed, in very stark ways. Russian president (and ally of Syrian president Bashir al Assad) Vladimir Putin was quick to denounce the strike as hasty aggression on the part of the United States. Kremlin spokesman Dmitry Peskov claimed the attack was an attempt on Trump’s part to distract from the thousand plus dead civilians which were the result of similar strikes in Iraq. The strike was also criticized for being against a sovereign nation without a formal declaration of war. It is unknown, as of now, how Russia will react. It may be safe to assume that Assad feels the same way, though his reaction will undoubtedly be much less measured.

Reactions in the United States were, predictably, polarized along party lines, with some exceptions. John McCain praised the strike with the rationale that it was a break from former President Barack Obama’s red line, one that was drawn and crossed without direct American intervention. Other prominent Republicans echoed the sentiment, save for Rand Paul, who said that Trump should have consulted Congress before authorizing military action. The Democrats were also in agreement about the need for a formal declaration before military action. There was also a real ideological break between Trump supporters, some of whom praised Trump for taking a harder stance than Obama and some who lamented the decision as extending the neoconservative war machine, a violation of Trump’s promise to stop world policing and put America first.

What’s next then? Assad will undoubtedly react, and recent history allows us to guess that civilian casualties will skyrocket as a result of any action on the part of the Syrian government. Putin will be pressed to react too, though he has to walk a much trickier line to avoid what could easily become a military battle between superpowers (if he wants to avoid that at all). Trump will also have to toe the line while simultaneously backing up his newfound position of direct intervention against Assad. Trump has argued recently (and ironically) that nonintervention has allowed the normalization of civilian deaths to happen. How he plans to minimize those also remains to be seen.

As if that’s not enough, Trump has also been talking tough in regards to North Korea’s missile tests. Trump, who is on the second day of a summit with Chinese president Xi Jinpeng, has claimed that the United States will do something about North Korean aggression. Now we know that Trump is more than willing to act on his threats, the relationship between China and America, already tense, threatens to heat up as well. Trump has accused the Chinese of appeasing the Kim regime and allowing that country’s bluster to be normalized. If Trump similarly decides to directly intervene against Kim Jung Un, there is a risk of Seoul or Japan being bombarded as well as the creation of nearly 25 million refugees or displaced people, a humanitarian crisis that will make Syria look quaint by comparison.

If Trump decides to continue involving America in direct intervention in Syria, we risk a military response, and eventual escalation, between America and Russia. If Trump’s tough talk on North Korea turns into action, we run up against China. A conflict with one superpower is bad enough but a formal war against two (or more) may be unwinnable. I will reiterate the same chain of events that will inevitably follow: ecological disaster, millions (or even billions) of displaced people, countless civilian deaths, famine, and the potential irreparable destruction of the planet. But as with most things Trump related, we can’t jump to conclusions yet. We must sit and we must hold our breath and wait.

Note: The Guardian is reporting a second attack in Idlib after the American airstrike.